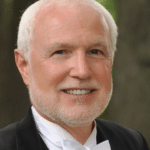 Dr. Thomas G. Evans has been the principal conductor of the Kalamazoo Concert Band since 2002. He is a Professor of Music at Kalamazoo College (1995) where he serves as its Director of Bands.

His jazz ensembles have toured domestically and internationally (Japan, Russia, Estonia, Finland, and Tunisia). Additionally, Tom serves as a Visiting Adjunct Professor for the University of Maryland where he team teaches courses in Italy and New Zealand.

In 2020, Tom received the Community Medal of Arts award sponsored by the Arts Council of Greater Kalamazoo. The Community Medal of Arts award recognizes an individual for their significant creative contributions and leadership in the arts. This lifetime achievement award also highlights an artist who has received acclaim on a local or national level and who has made a tremendous impact on our community through art. This award encompasses all art forms, including but not limited to visual, musical, theatrical, literary, performing, multi-media, architecture or design.

Brian K. Shetterly was named Assistant Conductor of the Kalamazoo Concert Band in the fall of 2003. Brian retired in 2011 from his position as the Director of Bands and Orchestra at Three Rivers High School where he taught and conducted the High School Bands and the High School Orchestra. While at Three Rivers Brian taught Beginning Band, Middle School Bands and conducted the H.S. String Orchestra, H.S. Symphony Orchestra, H.S. Concert Band, H.S. Symphony Band, the Wildcat Basketball Pep Band and the Wildcat Marching Band. He has also served as the President of the Michigan School Band and Orchestra Association District 11 and as a member of the MSBOA State Executive Board.

Brian started teaching at Three Rivers in 1984 after spending six years as the Director of Bands in Watervliet, Michigan. Brian’s Middle School Bands, High School Bands and Marching Band consistently received Division I Superior Ratings at Michigan School Band and Orchestra Association Concert and Marching Festivals at the District and State levels for 33 years. His Bands at Three Rivers received Superior Ratings and have won numerous competitions including Festival Disney and the MusicFest Orlando Concert and Marching Competitions in Orlando and Music In The Parks Competitions in Sandusky, Cincinnati, St. Louis, Chicago, Toronto and Orlando. The Three Rivers High School Symphony Band won the prestigious Festival Disney Concert Band Division National Championship Trophy in the spring of 2006. Brian was awarded the Rotary Club/Three Rivers Community Schools Distinguished Educator of the Year Award in 2006 and was named MSBOA Emeritus Member in January of 2012.

Brian holds a Bachelor of Music Education Degree from Central Michigan University and has done graduate work at Western Michigan University and the VanderCook College of Music in Chicago. He is currently Principal Bass Trombonist with the Kalamazoo Concert Band and has been a member of the band since 1985. He remains active in music education as an adjudicator, clinician and private lesson teacher.